JUDGES: BROKEN SAVIORS
Throughout this book, God makes a routine out of habitual, long-suffering mercy toward his people. Judges is filled with violence, intrigue, civil war, abuse, judgment, power-grabs, and horrible sin; but whenever his wayward people cried out to him, God sent a deliverer to give his people peace. This is the mercy of a loving Father who warned them often about their behavior and watched in pain as they repeatedly returned to destructive cycles. Everything that the judges were supposed to do for the people — to deliver them from enemies, provide peace, instill unity, give direction, speak God’s words, and so on — are all met in Jesus. His Kingdom is coming, and his deliverance is permanent! 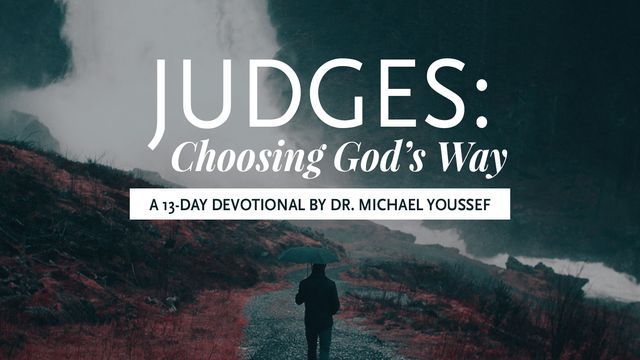 1 After the death of Joshua, the people of Israel inquired of the Lord, “Who shall go up first for us against the Canaanites, to fight against them?”

25 In those days there was no king in Israel. Everyone did what was right in his own eyes.

10 And all that generation also were gathered to their fathers. And there arose another generation after them who did not know the Lord or the work that he had done for Israel.

19 But whenever the judge died, they turned back and were more corrupt than their fathers, going after other gods, serving them and bowing down to them. They did not drop any of their practices or their stubborn ways.

I. Will we take sin seriously?
II. Will we worship God exclusively?
Small areas of sin lead to large areas of disaster.
Toleration leads to devastation.
What seems reasonable becomes lethal.
Judges 1:19, 27-28 ESV

1 Now the angel of the Lord went up from Gilgal to Bochim. And he said, “I brought you up from Egypt and brought you into the land that I swore to give to your fathers. I said, ‘I will never break my covenant with you, 2 and you shall make no covenant with the inhabitants of this land; you shall break down their altars.’ But you have not obeyed my voice. What is this you have done? 3 So now I say, I will not drive them out before you, but they shall become thorns in your sides, and their gods shall be a snare to you.”

19 But whenever the judge died, they turned back and were more corrupt than their fathers, going after other gods, serving them and bowing down to them. They did not drop any of their practices or their stubborn ways.

17 so that Christ may dwell in your hearts through faith—that you, being rooted and grounded in love, 18 may have strength to comprehend with all the saints what is the breadth and length and height and depth,

11 And the people of Israel did what was evil in the sight of the Lord and served the Baals. 12 And they abandoned the Lord, the God of their fathers, who had brought them out of the land of Egypt. They went after other gods, from among the gods of the peoples who were around them, and bowed down to them. And they provoked the Lord to anger. 13 They abandoned the Lord and served the Baals and the Ashtaroth. 14 So the anger of the Lord was kindled against Israel, and he gave them over to plunderers, who plundered them. And he sold them into the hand of their surrounding enemies, so that they could no longer withstand their enemies. 15 Whenever they marched out, the hand of the Lord was against them for harm, as the Lord had warned, and as the Lord had sworn to them. And they were in terrible distress. 16 Then the Lord raised up judges, who saved them out of the hand of those who plundered them. 17 Yet they did not listen to their judges, for they whored after other gods and bowed down to them. They soon turned aside from the way in which their fathers had walked, who had obeyed the commandments of the Lord, and they did not do so. 18 Whenever the Lord raised up judges for them, the Lord was with the judge, and he saved them from the hand of their enemies all the days of the judge. For the Lord was moved to pity by their groaning because of those who afflicted and oppressed them.

The opposite of love is apathy.
God is jealous to be our only God; to worship Him as a God who saves
Philippians 3:18-19 ESV

18 For many, of whom I have often told you and now tell you even with tears, walk as enemies of the cross of Christ. 19 Their end is destruction, their god is their belly, and they glory in their shame, with minds set on earthly things.

1 Now the angel of the Lord went up from Gilgal to Bochim. And he said, “I brought you up from Egypt and brought you into the land that I swore to give to your fathers. I said, ‘I will never break my covenant with you,
15 Whenever they marched out, the hand of the Lord was against them for harm, as the Lord had warned, and as the Lord had sworn to them. And they were in terrible distress.

14 “Now therefore fear the Lord and serve him in sincerity and in faithfulness. Put away the gods that your fathers served beyond the River and in Egypt, and serve the Lord. 15 And if it is evil in your eyes to serve the Lord, choose this day whom you will serve, whether the gods your fathers served in the region beyond the River, or the gods of the Amorites in whose land you dwell. But as for me and my house, we will serve the Lord.” 16 Then the people answered, “Far be it from us that we should forsake the Lord to serve other gods, 17 for it is the Lord our God who brought us and our fathers up from the land of Egypt, out of the house of slavery, and who did those great signs in our sight and preserved us in all the way that we went, and among all the peoples through whom we passed. 18 And the Lord drove out before us all the peoples, the Amorites who lived in the land. Therefore we also will serve the Lord, for he is our God.” 19 But Joshua said to the people, “You are not able to serve the Lord, for he is a holy God. He is a jealous God; he will not forgive your transgressions or your sins. 20 If you forsake the Lord and serve foreign gods, then he will turn and do you harm and consume you, after having done you good.” 21 And the people said to Joshua, “No, but we will serve the Lord.” 22 Then Joshua said to the people, “You are witnesses against yourselves that you have chosen the Lord, to serve him.” And they said, “We are witnesses.” 23 He said, “Then put away the foreign gods that are among you, and incline your heart to the Lord, the God of Israel.” 24 And the people said to Joshua, “The Lord our God we will serve, and his voice we will obey.” 25 So Joshua made a covenant with the people that day, and put in place statutes and rules for them at Shechem. 26 And Joshua wrote these words in the Book of the Law of God. And he took a large stone and set it up there under the terebinth that was by the sanctuary of the Lord. 27 And Joshua said to all the people, “Behold, this stone shall be a witness against us, for it has heard all the words of the Lord that he spoke to us. Therefore it shall be a witness against you, lest you deal falsely with your God.” 28 So Joshua sent the people away, every man to his inheritance.